OHW scenario #1 The field of battle.

Having given this some thought I have decided that the best way to present this game is as a general write up of the action rather than focusing too much on the details of the rules. For those interested DBN may be purchased from the authors HERE and you will need a set in order to use my playsheet. 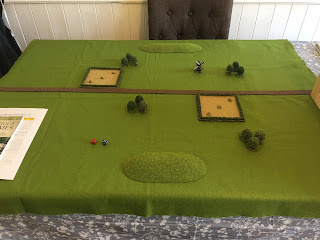 This scenario is a straightforward encounter with both sides deployed on the table. Victory goes to the side that destroys the most enemy bases or captures the enemy baggage by being in base contact with it at the end of a turn. Both baggage bases begin the game on the high ground and cannot be moved so must be defended.

The commander of the British army is the notorious General Sir Richard Roe-Chester, known to his men as 'Lucky Dick' and owner of extensive lands in the County of Kent. The opposing commander of the Franco/Bavarian army is The Marquis Jaques d'Offe a Nobleman of proven courage in the field, and a lover of fine wines, good food and beautiful women, not necessarily in that order. 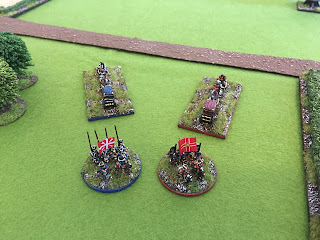 First step is to roll for attacker/defender, the defender then chooses his side of the table and deploys his troops. Obviously in this scenario there is no advantage to be had in the terrain, but this will change as I play through the scenarios from One Hour Wargames. Attacker then deploys and takes the first turn.

Photos show the table set up, you can see that I have dressed things up a little as the published scenario is just the two hills!  I have made a couple of new circular command bases and finishing off the casualty markers which just need a bit of static grass, other than these there is no battlefield clutter which is something I wanted to achieve.

The storage unit is gradually filling up with troops and terrain. Note the two painted dice, red and blue in keeping with the OHW theme, had to paint all those dots back in!

We are good to go. 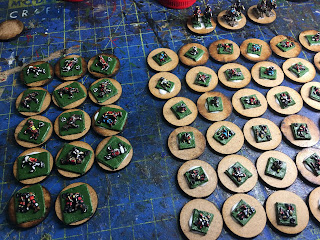 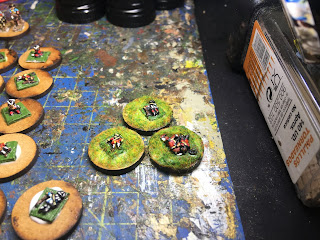 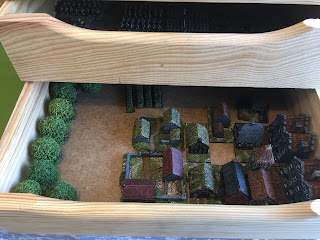 My other blog has been running for 10 years with many twists and turns along the way. Plenty of 6mm content to be had there pre 2014!
A Figure Painting Therapy Project.